Here Be Dragons: Placing the Story 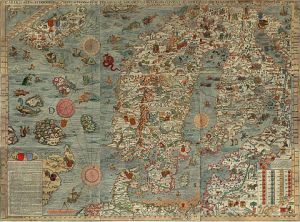 For me, story begins with voice, a voice that fairly soon after I first encounter it, shows itself to come from a specific place. Once that place surrounds the voice, the character comes alive and moves in it. Without setting, voice and character float away. Setting anchors story in a specific place and time, in sounds and textures, expectations and surprises.

On some medieval maps, dragons or other fantastical beasts were drawn about the edges, in the open sea, in the explored regions of the world. In that terra incognita—uncharted, unknown lands—who knew what might lurk there? In those mysterious unknown climes there might dwell beasts, sea serpents, and even dragons.

What magic and mystery, what dragons and surprising creatures have come into our lives and become real through story! Think for a second of each of these places: Narnia, Hogwarts, Transylvania, Treasure Island, Cold Comfort Farm, Mr. McGregor’s Garden, Earthsea, Pemberley, Jordan College, Goldengrove, Camp Green Lake, The Garage on Falconer Road, Middle-earth, The Underneath, The House of the Seven Gables, The Night Kitchen, at Sea in a Pea Green Boat, The Hundred Acre Wood, The Road, Toad Hall, Elsinore Castle, Troy, a Raft on the Mississippi River, Sleepy Hollow, The Limpopo Academy of Private Detection, the Boat with Two Wise Eyes on the Yantze River, Outside Over There, Wuthering Heights, a Kingdom by the Sea, The Forest Primeval.

THIS is the forest primeval. The murmuring pines and the hemlocks,
Bearded with moss, and in garments green, indistinct in the twilight….

When my youngest daughter was only about three years old and her sisters around six and fourteen, their father and I took them camping high in the Sangre de Cristo Mountains between the Spanish Peaks and Trinchera Peak just below Bear Lake and Blue Lake in Southern Colorado. The Cucharas Creek burbled alongside our tent site and branching trails led through the forest up to the lakes past beaver dams that formed smaller ponds along the way. We’d hiked high into the glacier valley when, just after noon, a thunderstorm rumbled in over the mountain. We ran for camp, father and two older sisters faster than the three-year-old and I could go. As the thunder got closer Stephanie and I entered the wooded part of the path with the others far ahead. Soon we lost sight of them and at the fork in the path stopped to try to figure out which way they had gone. I knew that both paths ended up back at the campsite, so we took off along the left hand path. Soon we could see a bit farther along and the rest of the family was nowhere in sight.

Stephanie wanted to go back and take the other path, but I told her, “This path will end up right where we started. You’ll see just as soon as we get out of the forest.”

She stopped still and pulled back on my hand, then she moved close to me and gazed all around at the huge looming pines and into the dark patches of shadow, fog, and mist between them. “Is this the forrrrresst?” she said. Her little eyes reflected all the mystery, magic, and terror of all the fairy tales she’d heard by that time in her young life.

We were in THE FOREST and who knew what dragons, fairies, gnomes, witches, and other beasts of terra incognita might meet us along our path? Thunder and a little rain were nothing compared to the adventure we entered in that moment when physical “real” place intersected with story. I have to admit that through her reaction—and her imagination—that wooded path became THE FOREST for me, too, and transformed into something more magical and a little more terrifying than it had been when it was just a real place on a real mountain in very real Colorado thunderstorm. It was as if the glaciers had reformed behind their mounds of stone rubble and reabsorbed the lake water back into themselves. The wind blew colder and the rain turned to sleet and we entered a time long lost to the others on that mountain. We were in the forest primeval.

As writers, we sometimes think of setting, as Eudora Welty calls it in her essay, “Place in Fiction,” in The Eye of the Story, “one of the lesser angels that watch over the racing hand of fiction,” but she also says:
…so irretrievably and so happily are recognition, memory, history, valor, love, all the instincts of poetry and praise, worship and endeavor, bound up in place. From the dawn of man’s imagination, place has enshrined the spirit; as soon as man stopped wandering and stood still and looked about him, he found a god in that place; and from then on, that was where the god abided and spoke if ever he spoke.

In our stories, setting and place are determined by character and character’s reactions to them. Character is affected by place in a wholly and even, perhaps, holy way. Voice, character, place, all bound together, inseparable—where the god abides and speaks, if ever she does speak. 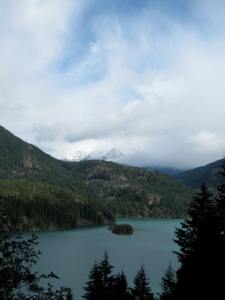 3 responses to “Here Be Dragons: Placing the Story”