I’m just home from a minor, unskilled role, helping with a wedding. One of the authors who has been part of my writing life for more than a decade, now, is a graduate of VCFA and has taught there a few semesters, too–Deborah Wiles. I got to see one of the first copies of Revolution, a story of the 60s and of Freedom Summer and of her own childhood memories spending summers with her family in the South. Her house is a home full of warmth, music,friends, good food, quirky stuff, and generosity. Since her youngest child was getting married…all the more so. We told a lot of stories and talked about traditions and family stuff that swirls in everyone’s life.

As we writers think about our characters and their families, sometimes we’re trapped by what we know–only able to play in our own playgrounds. We coax up a motivation that seems to fit perfectly for our protagonist and plan a scene using logic: what would make sense for this person to do or say under the circumstances? There’s nothing like a wedding to remind me that actions and reactions can be a tangle of barely-understood yearning and other emotions we hide even from ourselves. When a writer gets it right, though, we know.

A student recently included Eleanor and Park in her annotated bibliography and she wrote this: “One scene really hit me— Christmas Day the stepfather is in a seemingly good mood, but the more he drinks the family knows it is too good to last. Sure enough, he comes to dessert and wants to know where’s the pumpkin pie? He curses and flings rice pudding, and leaves. Then ‘Eleanor’s mom picked up the bowl with what was left of the rice pudding, and then skimmed the top off the pile of pudding on the floor. ‘Who wants cherry sauce?’ she said. They all did’ (199).

Up with families in all their messy glory–the gift to writers that keeps on giving.

“Cu nvm.”  So say the Trung, as they refer to a particular type of rain, “the rain that falls when hunters are soon to return.”* The Trung live in Yunnan province in China; the language itself is one of many dying languages. According to one study, of the close to 7,000 world languages, approximately 50-90% will be gone by the year 2100. These figures are startling and saddening, and raise a large number of cultural questions.

But what does Trung rain have to do with writing? How does it affect me, granted a rather small way to look at things? My first response was to the sheer beauty and unusualness of the word. Reading it shifted my usual way of seeing things. It woke me up.

Rain is not only a natural phenomenon. It is also a cultural one. For the Trung, or, more likely, their ancestors, hunting is central enough to merit a word for a type of rain, one which is experienced only when hunters are about to return. We also hear something else in that word for rain — the desire for one’s loved ones to return. Rain filled with longing.

We also hear language working, turning and shifting upon itself, until it articulates just the right and culturally nuanced message. Not just “rain” or “sprinkles” or “showers” but a word that swells with hunger, desire, history, terrain, an image from the last hunt when your husband was mauled by the claws of a tiger: The rain that falls when hunters are soon to return.

Rain, its beauty and strangeness. Since I’m listening as a cultural outsider, the name for rain sounds differently in my ears than it does in the ears of a native Trung speaker. For me, the word rain has become defamiliarized. I hear the word slowly. I hear it poetically. That which has been taken for granted, in language and the world, has shifted to center stage in my consciousness.

Rain, a word in my novel. I’m currently taking a short novel through its zillionth draft. The novel takes place in NYC. In a few scenes, it’s raining. The hunters, though, are not coming home. There are no hunters. It’s contemporary NY, actually Staten Island. How do I describe the rain so that it has the same impact for the reader as the Trung word for rain? Right now, as it sits in my novel, rain slides prosaically and barely noticed. How do I prolong the rain, the word or words for it?

Maybe I should just let it rain and be done with it. 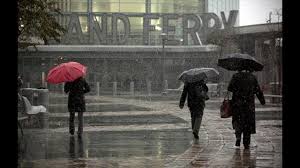 Not every word and sentence needs to be defamiliarized and not every drop of rain or tree leaf needs to be seen with new eyes or in a prolonged fashion. Sometimes we, our sentences and paragraphs and novels, just need to get on with things. On my walk to the bank later today, I can’t pause at every interesting pebble or gaze into every puddle nor, if they were making the same walk, can my characters. There are, after all, accounts to be transferred, bills to be paid. On page such and such, a character needs to be able to get out of her car and walk to the front door by the end of a brief sentence. (We’re much more interested in what will happen once she steps through that door and sees. . . .)

But now and then our sentences need to be slowed and our perceptions need to be more than automatic. Perception and the physical world, to borrow from Shklovsky who coined the term defamiliarization, needs to be made more aesthetic. We need prose to make it through a day, but we also need poetry to deepen it. We need Trung rain. Now and then, language and the world must “appear strange and wonderful” (Shklovsky quoting Aristotle).

The task is to decide when and why — to what purpose. How does the moment of shifted perception finally matter to our novels and to the characters within them? After all, the Trung don’t think about their word for rain; its simply part of how things are for them. But still. . . . When rain shifts, when a word shifts into something slow and rich and full of depth, into what new world are we stepping?

*Ross Perlin, “Vng Gyey Svr: How to Read the Dictionary of an Endangered Language,” Harper’s, August 2013.

I am happy to report that the old saying is true: if you live long enough, you may come back into style.

Next time I lecture, I will be doing a time-warp survey of literary critical theory, ending up with what some say is the post of postmodernism: metamodernism, or the New Sincerity. I like the way they capitalize it: It feels more sincere.

In the meantime, here’s a music video for your enjoyment that they say epitomizes metamodernism. It stars real astronaut Chris Hadfield, in space, singing David Bowie’s Major Tom.” It makes me cry. But apparently that’s cool now.

Plot on a Peg

In April Susan F. talked about how each book needs to find its own way.  I found this comforting.  Finding our stories.  Does it ever get any easier?  Are there really writers who find the one true way and stick to it? The desire line approach, the colored pencil diagramming, the stick-it-all-in-a-blender strategy.   For me every book seems to demand its own working method.  When I’m done with a solid first draft I think, “Okay, now I’ve got it.  I know how to write a novel.”  However when all the hurlyburly’s done and I’ve started a new project I can’t even remember what worked before.

So.  Last month I was in the Museum of London.  They have an exhibit about the Rose Theatre.  The Rose was built in 1587 and was the first place that Shakespeare’s plays were staged.    One of the artifacts in the museum is a document that hung on a peg backstage.  It was a list of entrances, exits and props.  What was this called?  The plot!

This discovery has led me to inventing a new idea about plot.  What about an outline that simply listed the characters and the objects in each scene?  What would be revealed from such a bare bones listing?  What would happen to a plot were one to introduce an alpine chicken orchid or a shingle froe to a stage?  I’m going to call this writing approach “Start With The Stuff.” You heard it here first.